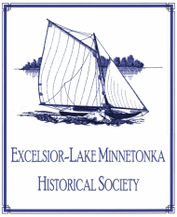 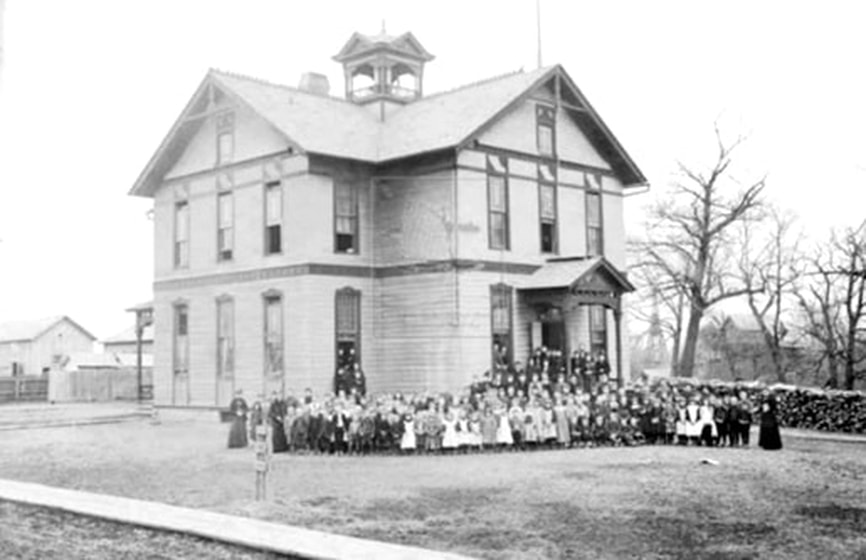 Children and teachers grouped together in front of the Excelsior Public School built in 1883 at 261 School Avenue. There were 3 teachers for all grades. The outhouse was in the back.

Description:  Two-story wood frame building for all grades. Younger students on 1st floor, older students on second floor. “The lower half of the building contained two large rooms and one small one and the main entry hall and stairway to the second floor. The upper floor were two main rooms separated by folding doors.”   School Memories of 1899, by Lowell H. Moody.

1890: The 1st nine-month school term was inaugurated. Originally school was held from December through March. The children had to help with chores, fall harvest and spring planting. But as Excelsior became more of a town and less of a farm settlement the term was gradually lengthened. 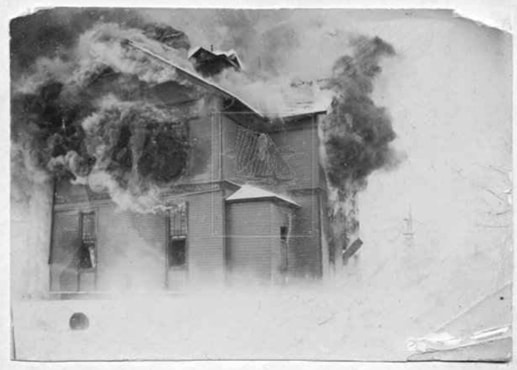 “The morning of February 8, 1899 was one to remember. The thermometer stood at well below zero (26 degrees if my memory serves me) and a stiff wind was blowing out of the Northwest. The hour being shortly after 8 o’clock, only a few pupils had arrived at school and they were mostly from the country. Suddenly a sheet of flame and smoke burst from one of the floor registers. Charles E. Sampson and I were acting as janitors while attending high school. We worked valiantly but it was soon evident we could not conquer the fire. It being quite evident the building was doomed, we all began carrying out text books and equipment in an effort to salvage as much as possible.

"Miss Alice Page [assistant to the superintendent] took the photos of the school burning. According to Lowell H. Moody, “she got her camera, climbing to the roof of the Congregational Churches horse shed, across the street from the school house.

"As soon as possible the school board secured the old Universalist Church building (now the Catholic church) on 1st street which was then vacant and after seats and desks were installed, school re-opened. We also had one room in the town hall for the first and second graders.”